What does it mean to ‘other’?

To ‘other’ another person or group of people is to highlight and acknowledge differences. We can ‘other’ based on a person or group’s identity or ideology, such as skin colour, sexual orientation, religion, political views, etc. There are limitless ways we create division and instill an “Us and Them” mentality.

The most common causes of ‘othering’ lead to negative stereotypes, prejudice, and discrimination. We can use those differences to demean, insult or exclude. In extreme cases, the ‘other’ is dehumanized, enslaved, or murdered. The non-marginalized group propagates inequity and justifies behaviour through contrived supremacy.

‘Othering’ is usually depicted as unfavourable. However, groups can also be ‘othered’ positively where people are generalized as hardworking, athletic, wealthy, meek, sexy, or having large genitalia.

Whether the othering is negative or positive, it’s the same. It’s a reduction of people into classifications where we have the potential to dehumanize or commodify.

‘Othering’ can be a fear-based survival mechanism in an environment where safety is out of reach, such as when resources are scarce. We have to compete with other groups for those limited means; it becomes easy to ‘other’ since our survival depends upon it.

In many developed nations, we have the collective capability to transcend mere survival; however, political strategies used throughout time, around the globe, from authoritarian to democratic leaders promote “othering’. The ‘other’ is used to incite fear, solidarity, nationalism, and resentment. It is also simultaneously used to create and reinforce the idea of supremacy over the ‘other’ fostering an “Us versus Them” mentality.

Leaders who elicit ‘othering’ the intentions may appear to vary on the surface. However, when deduced, it typically comes down to fear; fear of losing power, fear of others gaining control, fear of inability to survive and have a healthy livelihood. We are raised to believe that if we have less, then others have more, and vice versa. We are under false pretences that the accumulation of goods, power, resources, etc. will grant us safety and happiness.

We ‘other’ since we have stereotypical views about certain groups of people outside our conscious awareness. According to the University of California, Office of Diversity and Outreach, our unconscious bias stems from our tendency to organize our social world through categorizations. Everyone holds unconscious beliefs about various social and identity groups.

An example of this is a riddle I first heard in the 90s:

A father and son were away for a trip when they get into a horrible car crash. The father died instantly, but the son is rushed to the hospital to have an emergency operation. The surgeon looked at the boy and said, ‘I can’t do this operation. This boy is my son.’ Who was the surgeon?

I thought this surgeon riddle might be outdated in our current times until I stumbled upon a 2014 study by Mikaela Wapman and Deborah Belle (College of Arts & Sciences psychology professor) from Boston University. The researchers found that most young people and self-described feminists overlooked the possibility that the mother was the surgeon. We all consciously know that surgeons can be women; however, many of us become perplexed since a surgeon’s idea automatically conjures up a man’s imagery.

Regardless of what we are taught theoretically, even if we think we have structured our belief system towards equity, our collective biases are strong and unconscious. The University of California, Office of Diversity and Outreach indicated that unconscious biases are often incompatible with our conscious values and are far more prevalent than conscious prejudices. Also, scenarios such as working under pressure, stress and multi-tasking can activate and exacerbate unconscious attitudes and beliefs.

In today’s scenario, it can be argued that the COVID-19 pandemic has activated stress responses in the population; this would be aligned with the notion above. The stress-induced environment is contributing to the rise and prevalence and open display of unconscious biases. The results are the formation of allies and groups contributing to overt ‘othering,’ which can be displayed through racially charged occurrences, masks and anti-masks protests, and obedience and disobedience of health recommended regulations.

It’s easy to categorize than to get to know a person on an individualized level. Many of us from all backgrounds, ideologies, identities etc. do not question the origin or accuracy of what is taught or told to us and believe it at face value. Our perceptions start to adjust and focus on the positive or negative stereotypes of a group, such as West Indian men cheat, and all Asian women are meek and subservient. We end up continuously validating our observations associated with the label for that group. When we label and categorize people, it can keep us safe and conserve our energy, but it also limits our curiosity and blocks us from learning something new.

Many people in the group may fit the generalized characteristic because it has been passed on and taught within the group dynamics. It is easy to be a product of our environment, upbringing and collective values.

Labelling and exhibiting stereotypical traits becomes a cycle, especially if inquiring, challenging, and feedback aren’t ingrained into the culture. If feedback loops are not present within the cultural framework, it becomes a slow process of growth and breaking free from the perception and the practice of norms, perceived or not. In some groups, breaking free or questioning norms is a punishable offence, resulting in ostracization, banishment, or loss of life.

The mass media still is disproportionately white and straight. Visible, ethnic, or LGBTQ+ people in mass media are often overlooked or are cast in narrow stereotypical roles such as the Asian migrant or model minority, the Gangster Latino, or the shade-throwing flamboyant gay male. These roles are rarely dynamic or multi-dimensional, which contributes to ‘othering.’

Michael B. Jordan, currently best known for the Black Panther villain role, is outspoken and promotes inclusion riders. Whereby policies can be written into actors and actresses contracts that would require filmmakers to meet diversity benchmarks, such as at least 50 percent of the cast and crew are women or people of colour. This would aid in eliminating the persistence of ethnic and racial stereotypes. It could eventually mean soon; any perceived race can play a lead character, traditionally reserved for a caucasian actor/actress.

What We Lose By Othering

When we ‘other,’ we reduce a group into a single dimension, and we paint them with a single stroke. It’s unfair to ‘other’ people, whether in a positive or negative light, since it diminishes individuality and ascribes people to a fixed way of being. This often leads us to the path of dehumanizing or commodifying.

In every single culture or group, there are moral people, sociopaths, conservative, politically left-wing, rebels, rule followers, creatives, left-brain thinkers, and mixtures of all in between. People are multi-dimensional. When we label, we deny each other the chance to change. This limits our curiosity and hinders us from learning something new.

Our external world is a reflection of our internal world. When we deny others the opportunity to be different, we also deny ourselves the freedom to break out of a prescribed mould. We project our own perceived limitations onto others and deny everyone, including ourselves, personhood and humanity. 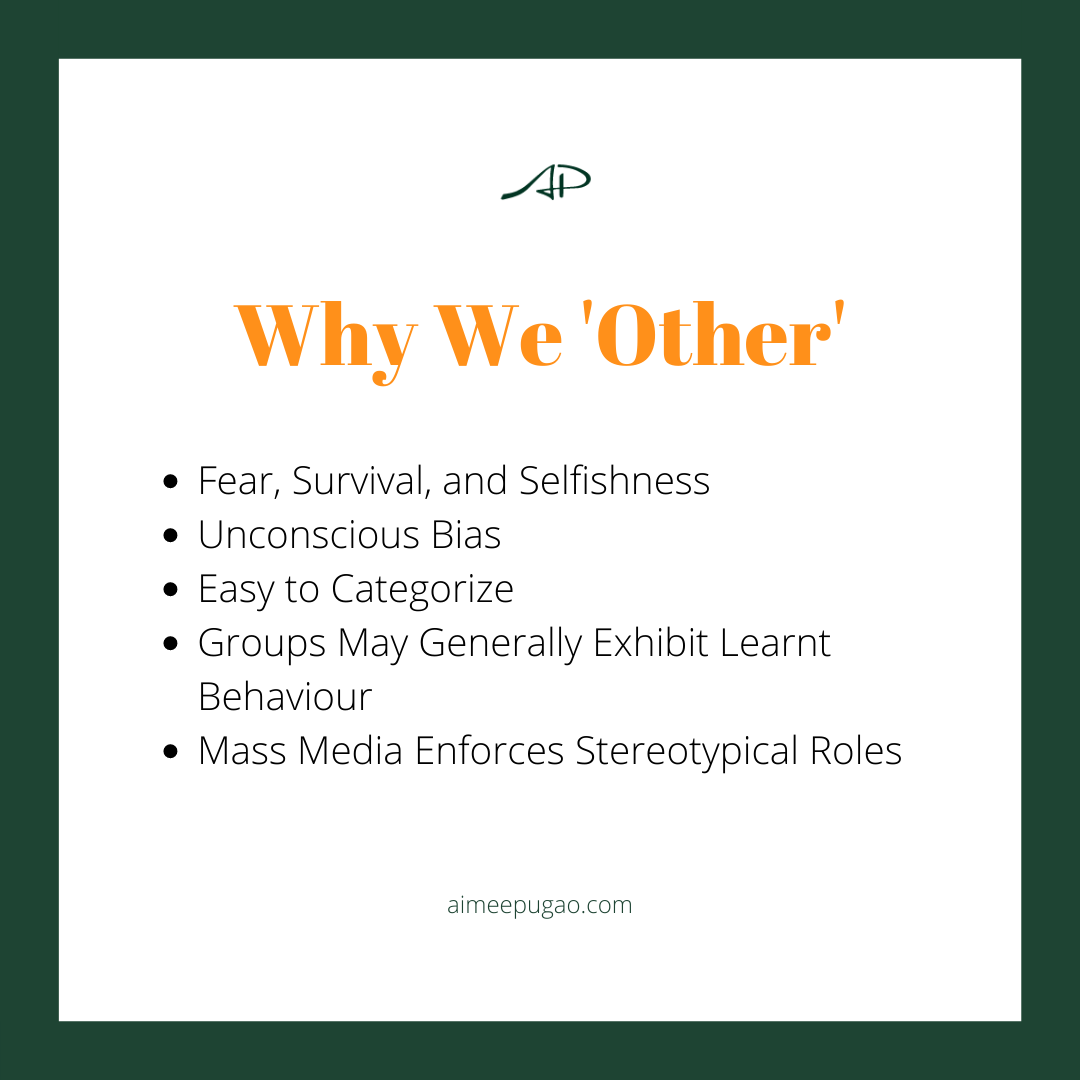 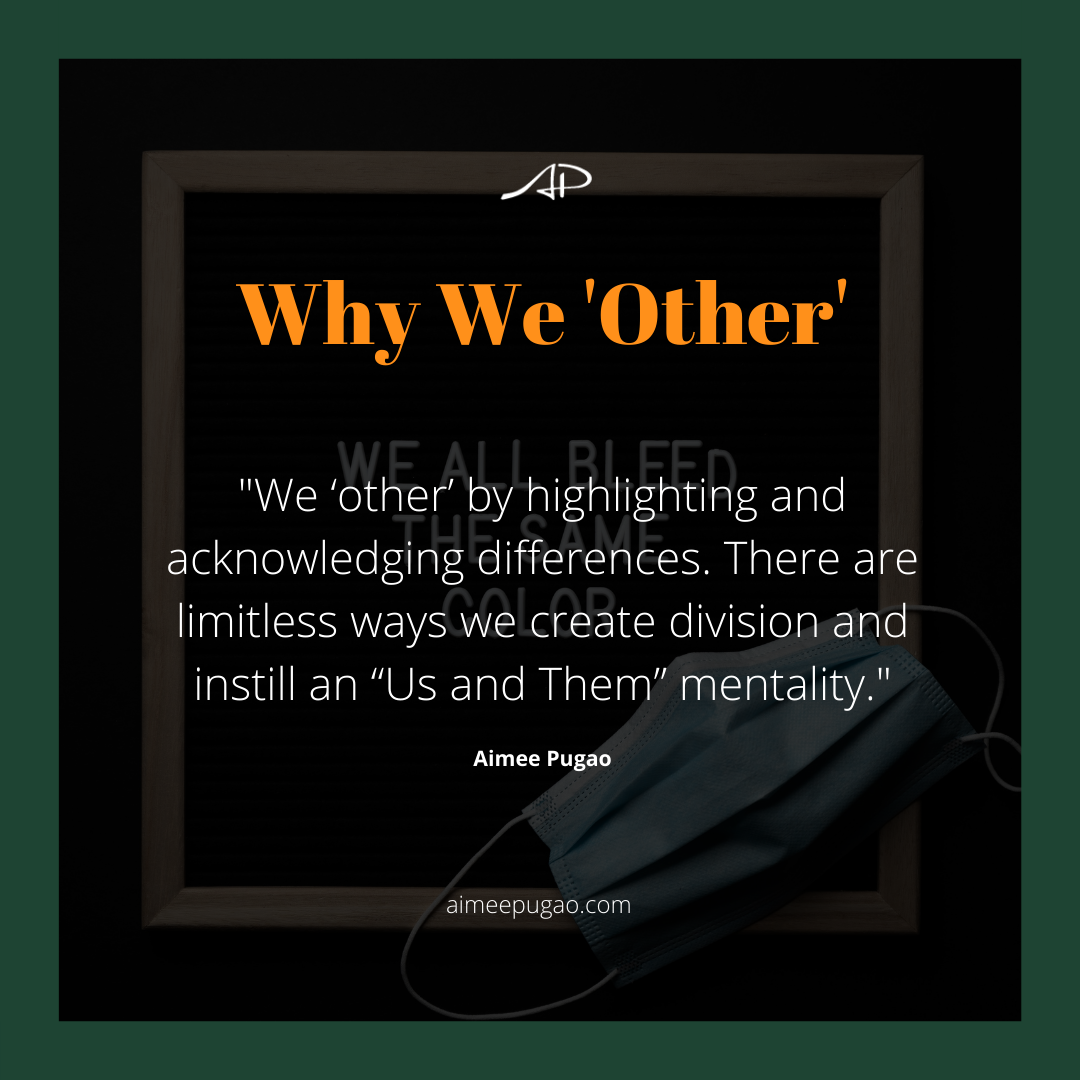 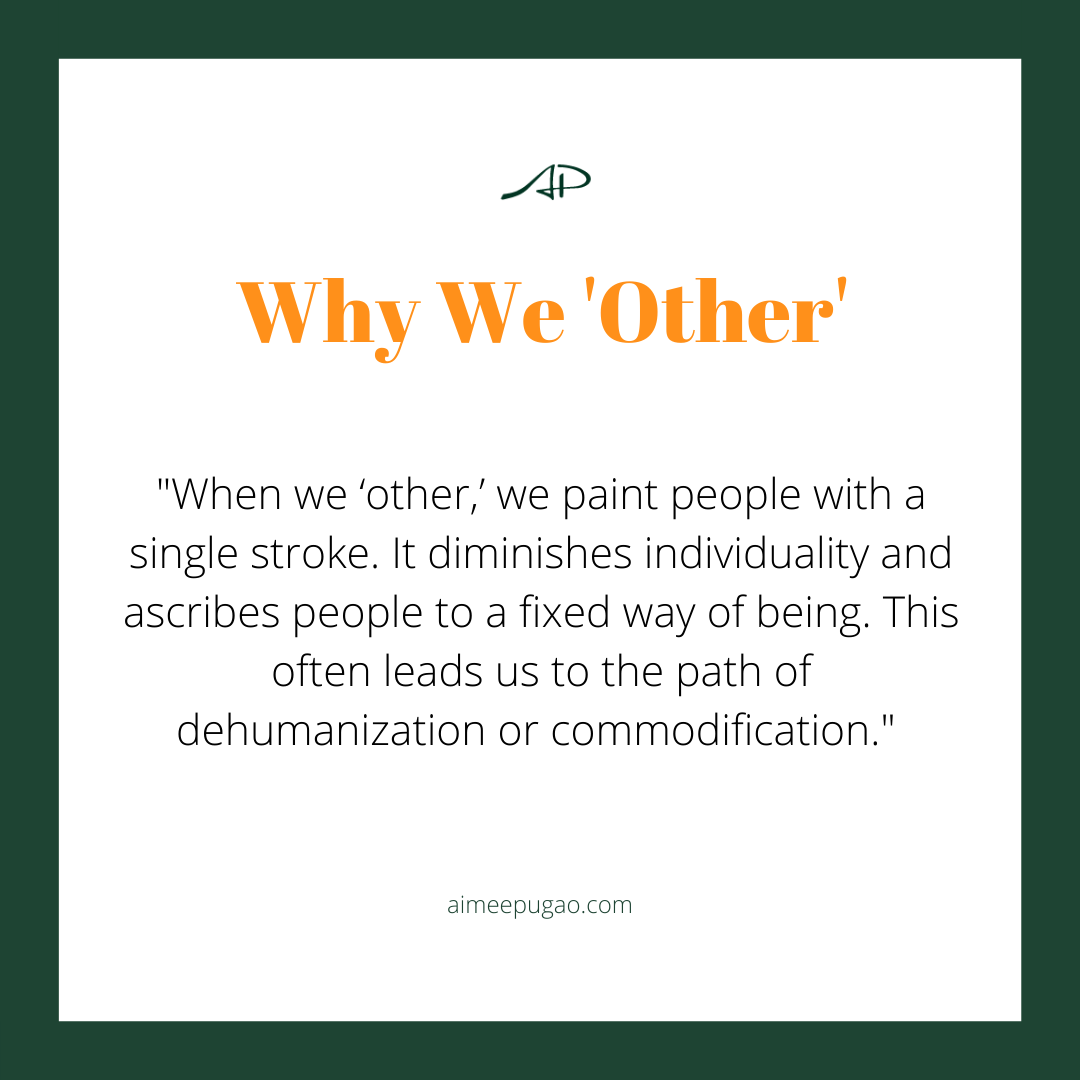 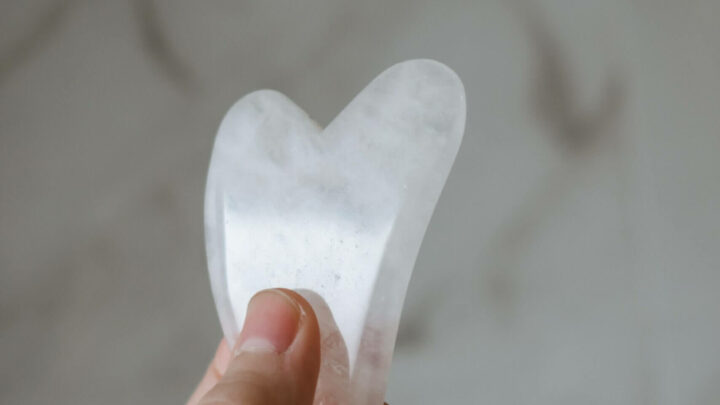 Having a Healthy Ego

The concept of the ego can be traced back to Sigmund Freud in the Psychoanalytic Theory of Personality (1923). Freud described the personality as comprised of three elements: the id, the ego, and the super-ego. 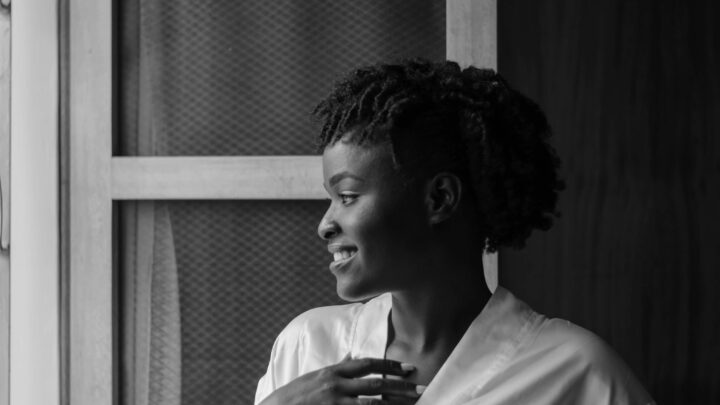 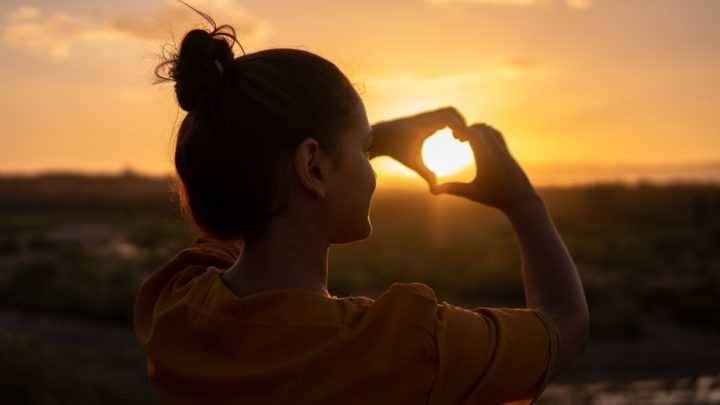 Cultivating Self-Love may seem like an easy task on the surface. It’s a phrase that’s used often, but when we look beyond the surface, what does it mean? Ideally, we want to feel good about ourselves, our place in this world, have confidence, and have self-esteem.

Reminders of the wisdom that’s already within each of us. The Dissection Of Society and Self, Truth-telling, Healing, and Thriving